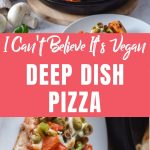 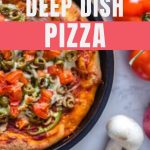 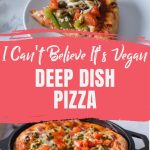 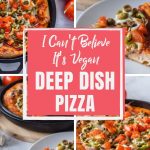 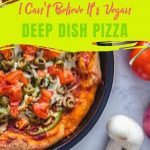 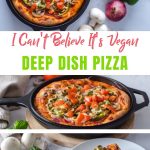 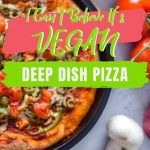 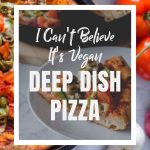 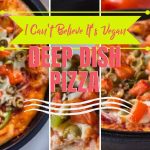 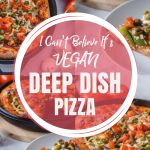 No need to have a pizza oven or a special pizza pan. Our Vegan Pizza is an easy deep dish recipe that’s baked in an ovenproof skillet. From start to finish, it only takes 40 minutes.

The deep-dish pizza originated in Chicago and was first made by Italian immigrants as a blend of American and Italian cultures. It’s different from traditional pizza in that the base is thick and almost like a pie crust.

Love Italian food? You might enjoy making our Vegan Mushroom Risotto Recipe or if you’re in the mood for cheese, why not try this Vegan Mac and Cheese Recipe.

What is a vegan deep dish pizza?

Traditionally, deep-dish pizza is almost like an upside-down pizza. Because the crust is thick, it usually takes longer to bake and this could result in the cheese and toppings burning. The inventors of the deep dish, flipped the recipe and added the cheese first, followed by traditional meat toppings, and finally the pizza sauce.

Our vegan recipe follows a similar pattern, except we’ve taken out the non-vegan ingredients and replaced them with vegan-friendly options. We’ve also spread our vegan-friendly pizza sauce on the base first.

Instead of the traditional mozzarella, we’ve used vegan cheese and replaced the toppings with mushrooms, green pepper, onion, and olives.

If you’d like to find out more about vegan cheese, read: What is Vegan Cheese and How Is It Made?

How to make this vegan pizza

Although this recipe is extremely easy, here are a few tips that will help you make the best deep dish vegan pizza ever! And all in the comfort of your own home.

Check that your pizza dough is vegan

Most pizza dough should be vegan. However, we do recommend that you check the ingredients before you buy it just to be sure. If you are gluten-intolerant, you might want to choose a vegan brand that is also gluten-free.

Use an ovenproof skillet

If you have an ovenproof skillet, it will work very well for this recipe. If you don’t, you can use a cake pan instead.

Grease the skillet with olive oil before pressing in the dough

Use some olive oil to grease the skillet on the bottom and up the sides. This will prevent the dough from sticking and will also help the dough become crispy. If you are using a cake pan, don’t forget to grease all the way up the sides.

Layer the cheese first, then the toppings

Once you’ve spread the pizza sauce on the base, layer the cheese first then the rest of the toppings. This will keep the cheese from going brown or crisping. Sprinkle your choice of Italian herbs on top just before baking. 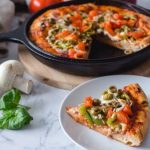 For more vegan dinner ideas, you can try: Vegan Meatloaf with Mushrooms and Lentils

Or for a great dessert, you can make this Vegan Aquafaba Chocolate Mousse Recipe