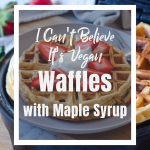 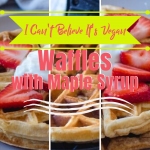 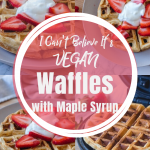 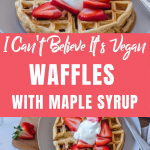 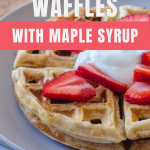 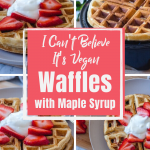 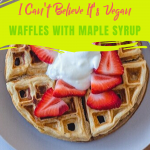 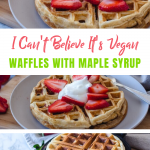 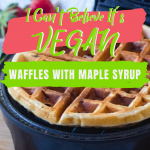 What’s for breakfast? Freshly made Vegan Waffles with Maple Syrup! If you’re tired of oatmeal, then this easy recipe is just for you.

One of the best breakfast dishes ever is waffles! Make these Vegan Waffles and serve them with fresh berries and vegan coconut yogurt or even ice cream. They only take 4-6 minutes to cook in the waffle maker.

What to use instead of eggs for these vegan waffles

Usually, waffles are made with an egg which acts as a binder and helps the texture. We’ve used flaxseed instead. Flaxseeds are full of health benefits and are a great egg substitute.

All you need to do is soak the flaxseeds for 15 minutes in the refrigerator to make a vegan egg substitute!

How to make these vegan waffles

Here are a few tips to help you make this recipe.

To make your waffles fluffier, let them rest for an hour

If you have time, put the waffle mixture into the refrigerator and let it stand for 1 hour. Believe us, the waffles will come out fluffier!

Use a whisk to mix

Whisking the ingredients will make the batter smoother and it will also make the waffles fluffier.

Place a ¼ cup of waffle mixture into the waffle maker, and cook for about 4-6 minutes. Remove the waffle as soon as it’s done to prevent burning.

Leftover waffles can be frozen for up to 4 months. If you have extra, pop them in an airtight container in the freezer. Defrost them before putting them in the waffle maker for a couple of minutes to crisp.

Serve the vegan waffles with maple syrup and your choice of fresh fruit. If you’re feeling like ice cream, try our Vegan Vanilla Ice Cream Recipe. 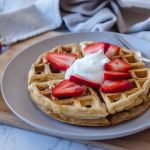